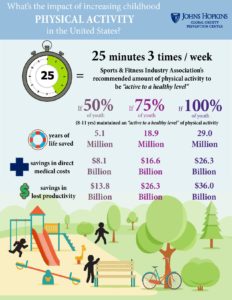 Increasing the percentage of elementary school children in the United States who participate in 25 minutes of physical activity three times a week from 32 percent to 50 percent would avoid $21.9 billion in medical costs and lost wages over the course of their lifetimes, new Johns Hopkins Bloomberg School of Public Health research suggests.

The findings, published May 1 in Health Affairs, suggest that just a small increase in the frequency of exercise among children ages 8 through 11 would also result in 340,000 fewer obese and overweight youth, a reduction of more than 4 percent. If all current 8- through 11-year-olds in the United States exercised 25 minutes a day, three times a week, the researchers suggest that $62.3 billion in medical costs and lost wages over the course of their lifetimes could be avoided and 1.2 million fewer youths would be overweight or have obesity.

These numbers represent cost savings for one cohort of 8-to-11 year olds, so every year that children in this age group reach those levels of physical activity, over $60 billion more would be saved.

“Physical activity not only makes kids feel better and helps them develop healthy habits, it’s also good for the nation’s bottom line,” says study leader Bruce Y. Lee, MD, MBA, executive director of the Global Obesity Prevention Center at the Bloomberg School, an American Board of Obesity Medicine partner organization. “Our findings show that encouraging exercise and investing in physical activity such as school recess and youth sports leagues when kids are young pays big dividends as they grow up.”

For the study, Lee and his colleagues, including team members from the Bloomberg School and the Pittsburgh Supercomputing Center at Carnegie Mellon University, developed a computational simulation model utilizing their VPOP (Virtual Population for Obesity Prevention) software platform to represent the current population of U.S. children and to show how changes in levels of physical activity could affect them throughout their lifetime and the resulting economic impact. The model relied on data from the 2005 and 2013 National Health and Nutrition Examination Survey (NHANES) and on information from the National Center for Health Statistics. The medical costs and the lost wages were calculated in the second model, which looked at the lifetime effects of physical activity.

The researchers also looked at various levels of healthy physical activity, starting with the current average of 32 percent of children 8 to 11 who exercise for 25 minutes a day, three days a week, up to 100 percent doing so. That is a guideline developed by the Sports and Fitness Industry Association. The researchers found that maintaining the current level of physical activity would result in 8.1 million of these youths being overweight or having obesity by 2020, which would cost $2.8 trillion in additional medical costs and lost wages over their lifetimes. An overweight person’s lifetime medical costs average $62,331 and lost wages average $93,075. For a person with obesity, these amounts are even greater.

This website uses cookies to improve your experience while you navigate through the website. Out of these, the cookies that are categorized as necessary are stored on your browser as they are essential for the working of basic functionalities of the website. We also use third-party cookies that help us analyze and understand how you use this website. These cookies will be stored in your browser only with your consent. You also have the option to opt-out of these cookies. But opting out of some of these cookies may affect your browsing experience.
Necessary Always Enabled
Necessary cookies are absolutely essential for the website to function properly. These cookies ensure basic functionalities and security features of the website, anonymously.
Functional
Functional cookies help to perform certain functionalities like sharing the content of the website on social media platforms, collect feedbacks, and other third-party features.
Performance
Performance cookies are used to understand and analyze the key performance indexes of the website which helps in delivering a better user experience for the visitors.
Analytics
Analytical cookies are used to understand how visitors interact with the website. These cookies help provide information on metrics the number of visitors, bounce rate, traffic source, etc.
Advertisement
Advertisement cookies are used to provide visitors with relevant ads and marketing campaigns. These cookies track visitors across websites and collect information to provide customized ads.
Others
Other uncategorized cookies are those that are being analyzed and have not been classified into a category as yet.
SAVE & ACCEPT
X