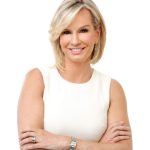 ABOM diplomates come from many different fields of medicine. We often get questions about how our diplomates arrive at the decision to certify and how they incorporate obesity medicine into their practices. In this occasional series, we introduce you to ABOM diplomates who can shed light on these questions.

Please take a moment to learn more about how Dr. Jennifer Ashton incorporates obesity medicine into her busy New Jersey-based OB/GYN practice and her position as ABC News Chief Women’s Health Correspondent & Senior Medical Contributor. Dr. Ashton, who is also the author of Eat This Not That When You’re Expecting, earned ABOM certification in 2016.

How did you come to be a doctor and a television contributor? Short answer: by accident! Ten years ago, I was asked to appear on live cable network television, and a week later, I was offered a contract as their first female medical contributor.  Three years later, I made the jump to national network news, and I’ve been at ABC News for the past four years. I found that the same communication skills I use in my private medical practice are the ones I use in live television. There are a number of tv broadcast skills I had to learn in order to do what I do, but overall I love the challenge of deciphering medical news for the lay public and offering my analysis of it. I still maintain my own practice which is critically important to me for many reasons, not the least of which is that I feel strongly that doctors on television should actually be practicing doctors, and not just ‘tv docs.’

Why did you decide to pursue ABOM certification? It presented itself during my program at Columbia University College of Physicians and Surgeons in which I was pursuing a Master’s degree in Human Nutrition. We were invited to attend a national conference on Obesity Medicine and during that conference I learned about ABOM. I felt that it was important to have some credentials in the fields of Nutrition and Obesity Medicine since I address it in my practice with my patients and discuss it on national television regularly.

It seems like every day there is a news story with an obesity hook. What do you wish your non-physician colleagues in the national health news industry knew about obesity? I wish that physicians and the lay public alike understood that obesity is not as simple as ‘eating less and moving more.’  It was only in studying for certification that I learned about principles like the ‘set-point theory’ or the ‘defense of fatness’ in which the body seeks to return to its heaviest weight even IF significant weight loss is achieved.  It made me appreciate how discouraged many obese and overweight people must feel when doctors and society alike see them as lazy or unmotivated for not losing weight/regaining weight that has been lost. I also wish that people in the health news industry understood the role for FDA-approved weight loss medications and bariatric surgery and didn’t view them as a ‘short-cut’ or an ‘easy way out.’ I often cite a mental health analogy: if you were bipolar, you would treat it, right? With medication! This is 2016! We should view the treatment of obesity the same way: it’s a chronic and life-threatening condition, and it should be treated as such.

What advice to you have for obesity medicine physicians about how they can contribute to the media coverage of obesity in their local communities? I think promoting their certification through ABOM is a good start. It lets people know that there is a specialty, and there is a skill-set and knowledge base that is required to achieve certification. Locally, ABOM physicians can reach out to local tv and radio stations and newspapers and provide their contact information so that they can be contacted when an obesity story is ‘trending’ or makes news. And don’t forget social media! Twitter and instagram are very helpful in communicating information.